In the previous article (Go to the article), we have seen how scale independent parameters (called critical process metrics, or CPMs) could be used to define the internal environment of a process or an equipment. In order to illustrate how this could be utilized in design, we have identified the following process equipment. In each of these unit operations, a different set of CPMs has been chosen to define the system. As the ultimate objective of any design or scale-up exercise, these CPMs have been correlated with the CQAs, obtained from the actual experimental data.

Crystallization constitutes an integral downstream separation and purification process of almost all pharmaceutical products. Right from a simple precipitation of the desired product from the solution, or removal of an impurity, to the more sophisticated way of isolating d- and l- isomers, crystallization has been one of the most talked about unit operations in the pharmaceutical industry, and not surprisingly so. The utility (and often the irreplaceable nature) of crystallization has led to a number of processes to be studies in laboratories. A lot of data is available on various APIs. However, the broad nature of the development has been more as an art than as science. It is mainly because of the intricate complexities involved in leading the process to the desired conclusion. It does not only mean getting the desired product, but getting it in the purest form, desired quantity, and often at a minimum cost. While the general mechanism (nucleation, growth, breakage, etc.) is fairly established, the real problem is establishing the kinetic parameters individually. One reason is that they cannot be measured in isolation, and often are linked with each other. But more importantly, these parameters are really not “only” kinetic. The part that hydrodynamics plays at various levels is equally less understood, and often ignored. Antisolvent and reactive crystallization involve addition of antisolvent(s) and/or reactants(s), and hence are governed by micro- and mesomixing characteristics. On the other hand, cooling crystallization is governed by heat transfer, and hence, micro- and macromixing play critical roles.

In the present case study, the experimental data for the crystallization of pyrazinamide has been taken from Yu et al. (2016). These experiments have been carried out at two different scales: (1) a 500 mL reactor and (2) a 10 L reactor. The effect of agitation on particle size was studied using marine propeller at different rotational speeds. In addition to this, the effect of seed particle size and loading is studied too.

The data thus collected was analyzed using logarithmic regression. As discussed previously, the effect of impeller rotation was quantified by the scale-independent parameter, P/V. As the seed particle size and loading were maintained across the scale, these parameters were used in their original forms.

The following figure, along with the table, give the details of the experimental conditions. If there are sufficient data points available for analysis, it is a good idea to segregate them as training and validation data sets. This allows one to test the validity of the model developed.

The regression analysis yielded a correlation in the following form:

where, Ls is the seed size (in mm), Cs is the seed loading (%w/w) and k, a, b and d are constants for the system. The particle size, D50 can now be predicted using this correlation, and the predicted values could be compared with the actual (experimentally measured) values of particle size with the help of regression coefficient and parity plot. The regression coefficient for the present study was 0.9, and the parity plot is as shown below.

A useful extension of this study is the parametric analysis of the system. In crystallization, maintaining a certain agitator speed is necessary in order to achieve the desired particle size.  At the same time, the maximum shear rate to avoid breakage of crystals has to be monitored closely. A parametric analysis in this case may be helpful in observing the effect of agitator speed on both, the particle size and the maximum shear rate. This would ensure that the system is being operated within the acceptable ranges of operating variables. 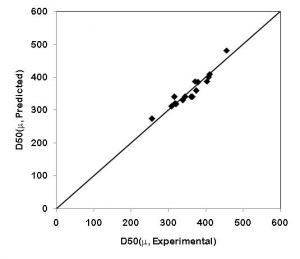 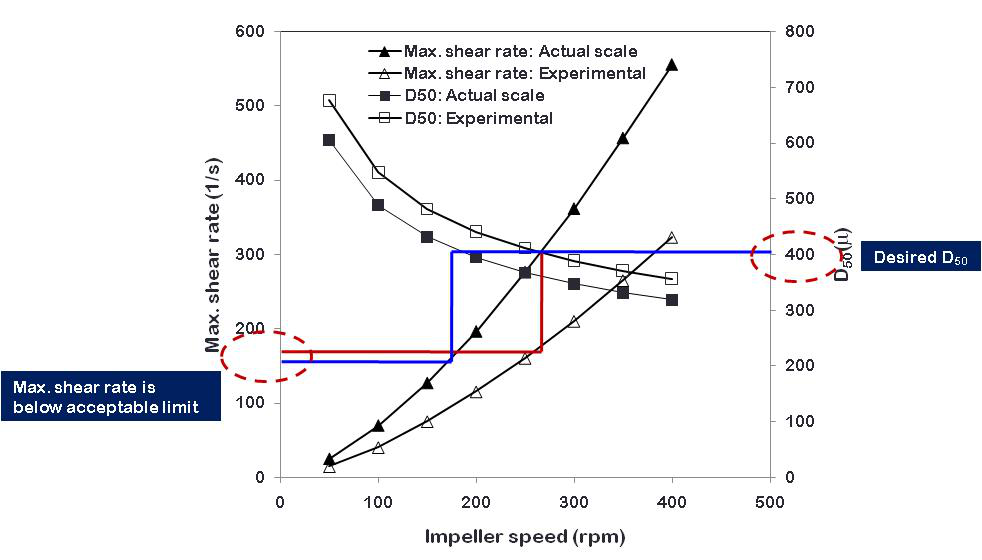 In the next article, we will take a look at another case study, that involves a dry granulator. (link)