In pharmaceutical industry, dry granulation (mostly carried out with a roller compactor, and hence the terms are often used interchangeably) is used  is widely used to process materials that are sensitive to moisture and heat. The final product, in a tablet or a powder form, is often used for oral dosage. The process mainly involves forming the ribbons of the formulation and subsequently converting them into powder using a suitable milling device.

One of the most commonly used CQAs is the ribbon density (or solid fraction), defined as the mass of the material per unit volume of the ribbon. It is a function of various process and geometric parameters, such as the roller diameter and speed, gap between the two rollers, screw speed and the force applied on the formulation, in addition to the physical properties of the formulation. Establishment of a design space for the roller compactor has largely been based on extensive experiments. This approach is obviously time and cost intensive. Also, owing to the limited availability of the actual formulation material, the properties are often mimicked, which in turn makes it even more difficult to study the effect of various operating parameters on the ribbon properties.

Various models have been proposed to simulate the dry granulation process. The two of the most widely used models are: (1) Johnson’s and (2) Reynolds’. Both these models have specific regimes of applicability. However, it has been observed that, the predicted values of ribbon densities are, in most cases, overestimated. Thus, it was thought to use the real experimental data to correlate the observed ribbon density with the abovementioned operating parameters. In order to make these parameters scale independent, the roller gap (x) and roller diameter (D) were made non-dimensional by taking their ratio (x/D). The roller force is inherently a function of roller speed, roller gap and screw speed. Also, by choosing the right combination of these parameters, it is possible to maintain this force across the scales. Hence, this parameter could be considered scale independent.

The experiments in the present case study were performed on a 120 mm dia. roller size, with the gap between the rollers varied. The roll force was directly measured and reported. A regression analysis yielded a model of the form:

where, rribbon is the ribbon density, x/D is the ratio of the roller gap to the roller diameter, and F is the roll force. The constants k, a and b are applicable for a particular system.

The goodness of fit could be seen from the comparison between the experimental and the predicted values of ribbon densities. 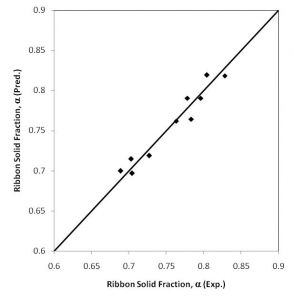 Our last article in this series will cover a stirred bioreactor (link). This is one of the most commonly used operations in pharmaceutical industry, and the case study is intended to address one of the most important performance parameters, viz., mass transfer coefficients.