Scale up of a bioreactor has been considered as one of the classical scale up problems in chemical and biochemical engineering. While bubble column reactors are commonly used, a large number of processes at production scale is carried out in stirred tank reactors. In the current section, the focus is on such stirred tanks.

The complexity of scale up may be largely attributed to the unknown kinetic parameters that need to be estimated each time a new process is introduced. Not only this, even with an existing process, the mechanism is often guessed based on the limited experimental data available. To make the matters worse, the material properties of the system often change during the course of the reaction. For example, the viscosity of the cell mass often increases as the reaction progresses, and taking the average value of viscosity is often not a good choice. Most importantly, the inherent complexities that a stirred tank design poses, makes it very difficult for the standard calculation procedures to be applied to bioreactors.

In the present case study, an experimental data was collected from the thesis of Oosterhuis on scale-up of bioreactors. These experiments were carried out in a laboratory reactor of 33 L volume. The effect of two different media was studied: coalescing and non-coalescing. In a stirred bioreactor, the impeller plays a three-fold role: (1) providing a uniform distribution of reactants in the cell mass; (2) ensuring a minimum suspension of the cell mass off the bottom of the reactor, and (3) distributing oxygen uniform distribution of oxygen and providing a high mass transfer coefficient for oxygen dissolution in the liquid. Thus, the oxygen distribution and  the mass transfer coefficient are functions of both, mixing characteristics of the impeller and the superficial velocity of oxygen.

A correlation in the following form was proposed using regression analysis:

where, kLa is the mass transfer coefficient for oxygen transfer (in s-1), P/V is the power dissipated per unit of liquid volume (in W/m3), Vs is the superficial velocity of oxygen gas (in m/s), and C, a and b are constants for the given system. A comparison of the experimental data and its predicted counterpart for the two media mentioned above is shown below: 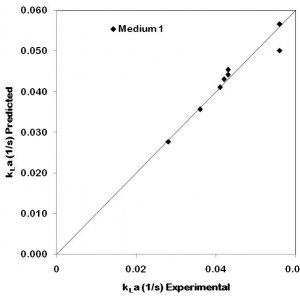 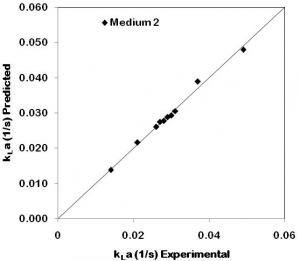 In adapting the QbD for pharmaceutical processes, scale independent “Critical Process Parameters” can play a useful role. Asset specific CPP-CPM relationships, when used in conjunction with process/recipe-specific CPM-CQA relationships, can be very effective in streamlining scale up and scale down activities associated with technology transfer activities. In addition, they can also provide a means to demonstrate process understanding to regulatory authorities.